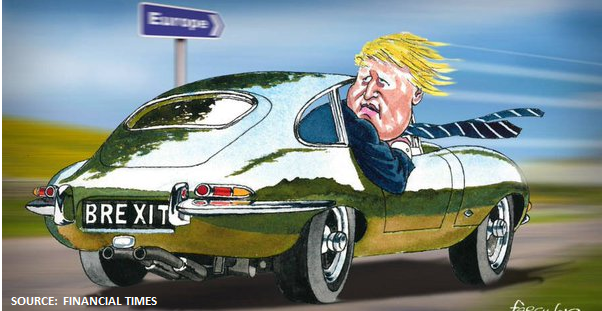 Pity the poor UK voters as they prepare to vote in probably the most critical election of their lives.

As they battle the wind and rain to vote in the first December election for 100 years, they already know there are only 3 likely outcomes:

The first option is less likely than the polls suggest, for the simple reason that Johnson will lose probably 40+ seats in Remain areas – to the LibDems in the South/London, and to the SNP in Scotland. To win, he therefore has to persuade large numbers of traditionally Labour Leave voters in the North/Midlands to vote Tory, for the first time in their family’s history.

President Trump’s proposed solution – an alliance with the Brexit Party – would avoid splitting the Leave vote and might gain the Brexit Party some Labour seats. But Trump’s personal unpopularity with most UK voters means his intervention on Friday is unlikely to help. Britons, like Americans, don’t like foreigners interfering in their domestic elections.

And then, of course, there are the dark arts of social media. Johnson’s chief of staff, Dominic Cummings, pioneered the UK’s use of these when running the Leave campaign.  Who knows what lies and half-truths will be circulated this time, and what impact they might have?

The second option depends critically on whether Labour can neutralise the Brexit issue by saying they will ‘trust the people’ with a second vote in a summer referendum – and not go into detail about the question that would be asked.

If they can, then their leader, Jeremy Corbyn, has a perfect opening for the old-fashioned campaigning at which he excels. He can simply attack the Tory record of the past 10 years and focus on issues such as the economy, climate change, the NHS and education, which are natural vote winners for Labour.

In normal circumstances, Labour would then be odds-on favourites to win.  But their leader, Jeremy Corbyn, has the lowest favourability ratings of any recent Opposition leader. He seen as an hard-line socialist and as weak on tackling anti-semitism in the party. As a result, the party struggles in the polls. 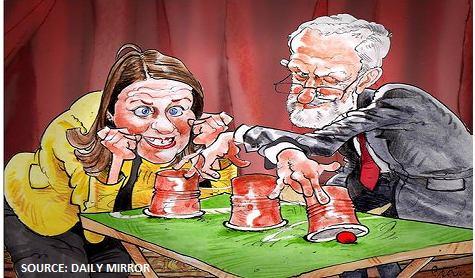 The 3rd option of another minority government includes a wide range of outcomes.  It could put the UK back in the chaos of the past 3 years, with nobody able to agree anything. Or, it could mean a second referendum on both Brexit and Scottish independence.

The key will be the level of LibDem support. Can they get to 75+ seats, and become ‘kingmakers’ along with the SNP and the other smaller parties?

Both Tories and Labour are vulnerable to them in Remain seats, due to their clear anti-Brexit policy.

Their focus on the characters of the Tory and Labour leaders is also a likely vote-winner.  But their problem is the UK’s ‘first-past-the-post’ electoral system, which usually means they win a lot of votes, but relatively few seats.

THE MAIN UK PARTIES HAVE ABANDONED THE MIDDLE GROUND
The problem for most voters is that there is no middle ground for them to choose, as in the past:

Johnson’s gamble depends on him winning a large number of seats from Labour to compensate for his losses in Remain areas.

Despite today’s poll ratings, Labour could therefore well take power as a minority government if they campaign effectively. The reason is that it is easier for them to do a deal with the other parties – by offering a referendum with a Remain option to the LibDems, and one on Scottish independence to the SNP.

Pity, therefore, the traditional middle-of-the-road Tory, Labour and LibDem voters,. They need to choose their ‘least worst option’ if they want to affect the result – Brexit, socialism or possible UK break-up. This would not be a great choice for a G7 country at the best of times. It would be even worse today, as an increasingly protectionist world slides into recession,