Oil markets remain poised between fear of recession and fear of a US attack on Iran. But gradually it seems that fears about a war are reducing, whilst President Trump’s decision to ramp up the trade war with China makes recession far more likely.

The chart of Brent prices captures the current uncertainties:

As a member of the President’s national security advisory team has noted:

“This is a president who was elected to get us out of war. He doesn’t want war with Iran.” 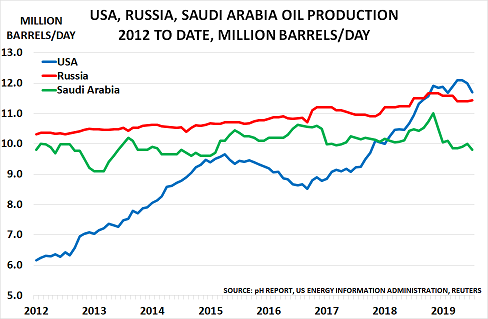 With fears about a potential war reducing, at least for the moment, attention has instead turned to issues of supply and demand.  And here, again, the balance of different factors has turned negative:

And the normally bullish International Energy Agency last week cut its demand forecast for this year and 2020 warning:

“The outlook is fragile with a greater likelihood of a downward revision than an upward one…Under our current assumptions, in 2020, the oil market will be well supplied.” 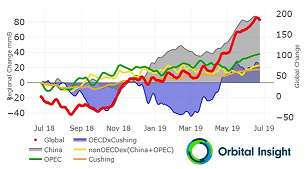 The third chart, from Orbital Insight, highlights the changes that have been taking place in inventory levels in the major regions.

Generated from satellite images of floating roof tank farms, it is based on estimates of the volume of oil in each tank, which are then aggregated to regional or country level.

Oil markets are by nature opaque. But Orbital’s data does show a very high correlation with EIA’s estimates for  Cushing – where the official data is very reliable. 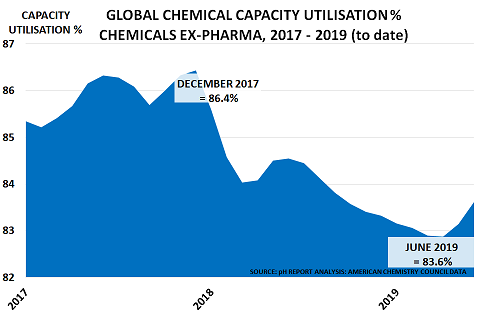 As discussed here many times before, the chemical industry is the best leading indicator for the global economy, due to its wide range of applications and geographic coverage.  The fourth chart shows the steady downward trend since December 2017 in the data on Capacity Utilisation from the American Chemistry Council.

Q2 has shown the usual seasonal ‘bounce’,  but key end-user markets such as electronics, autos and housing are also clearly weakening, as discussed last week for smartphones.  And Bloomberg has reported that US inventory levels at major warehouses are close to being full.

I suggested back in May that prudent companies would develop a scenario approach that planned for both war and recession, given that the outcome was then essentially unknowable.

Today, both scenarios are clearly still possible. But it would seem sensible to now step up planning for recession, given the downbeat signals from oil and chemical markets. 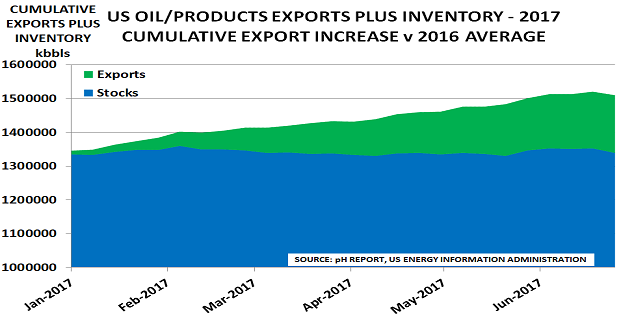 “Those who cannot remember the past are condemned to repeat it“. George Santayana

9 months ago, it must have seemed such a good idea.  Ed Morse of Citi and other oil market analysts were calling the hedge funds with a sure-fire winning strategy, as the Wall Street Journal reported in May:

“Dozens of hedge-fund managers and oil traders attended a series of closed-door meetings in recent months with OPEC leaders—the first of their kind, according to Ed Morse, Citigroup Inc.’s global head of commodities research, who helped organize some of the events.

“Group officials made the case for how supply cuts from the Organization of the Petroleum Exporting Countries would reduce the global glut….  Mr. Morse of Citigroup said he arranged introductions between OPEC Secretary-General Mohammad Barkindo and the more than 100 hedge-fund managers and other oil buyers who have met with Mr. Barkindo in Washington, D.C., New York and London since October…

“After asking what OPEC planned to do to boost prices, fund managers came away impressed, Mr. Morse said, adding that some still text with the OPEC leader.”

Today, however, hype is disappearing and the reality of today’s over-supplied oil market is becoming ever more obvious.  As the International Energy Agency warned in its latest report:

“In April, total OECD stocks increased by more than the seasonal norm. For the year-to-date, they have actually grown by 360 kb/d…”Whatever it takes” might be the (OPEC) mantra, but the current form of “whatever” is not having as quick an impact as expected.”

As a result, the funds are counting their losses and starting to withdraw from the market they have mis-read so badly:

  Pierre Andurand of Andurand Capital reportedly made a series of bullish bets after meeting a Saudi OPEC official in November, but saw his fund down 16% by May 5
  Once nicknamed “God” for his supposed ability to forecast the oil market, Andy Hall’s $2bn Astenbeck Capital fund lost 17% through April on bullish oil market bets

In a sign of the times, Hall has told his investors that he expects “high levels of inventories” to persist into next year. Consensus forecasts in April/May that prices would rally $10/bbl to $60/bbl have long been forgotten.

OIL MARKET FUNDAMENTALS ARE STARTING TO MATTER AGAIN
This therefore has the potential to be a big moment in the oil markets and, by extension, in the global economy.

It may well be that supply/demand fundamentals are finally starting to matter again.  If so, this will be the final Act of a drama that began around a year ago, when the young and inexperienced Mohammed bin Salman became deputy Crown Prince and then Crown Prince in Saudi Arabia:

  He abandoned veteran Oil Minister Naimi’s market-share strategy and aimed for a $50/bbl floor price for oil
  This gave US shale producers a “second chance” to drill with guaranteed profits, and they took it with both hands
  Since then, the number of US drilling rigs has more than doubled from 316 in May 2016 to 763 last week
  Even more importantly, the introduction of deep-water horizontal drilling techniques means rig productivity in key fields such as the vast Permian basin has trebled over the past 3 years from 200bbls/day to 600 bbls/day

The chart above shows what the hedge funds missed in their rush to jump on the OPEC $50/bbl price floor bandwagon.

They only focused on the weekly inventory report produced by the US Energy Information Agency (EIA). They forgot to look at the EIA’s other major report, showing US oil and product exports:

  US inventories have indeed remained stable so far this year as the blue shaded area confirms
  But US oil and product exports have continued to soar – adding nearly 1mb/day to 2016′s 4.6mb/day average
  This means that each week, an extra 6.6mbbls have been moving into export markets to compete with OPEC output
  Without these exports, US inventories would have risen by another 13%, as the green shaded area highlights
  In addition, the number of drilled but uncompleted wells – ready to produce – has risen by 10% since December

These exports and new wells are even more damaging to the OPEC/Russia pricing strategy than the inventory build:

  Half-way across the world, India’s top refiner is planning to follow China and Japan in buying US oil
  US refiners are ramping up gasoline/diesel exports, with Valero planning 1mb of storage in Mexico

As Naimi warned 2 years ago, Saudi risked being marginalised if it continued to cut production to support prices:

“Saudi Arabia cut output in the 1980s to support prices. I was responsible for production at Aramco at that time, and I saw how prices fell.  So we lost on output and on prices at the same time.”

How low oil prices will go as the market now rebalances is anyone’s guess.

But they remain in a very bearish pattern of “lower lows and lower highs”.  This suggests it will not be long before they go below last year’s $27/bbl price for Brent and $26/bbl for WTI.