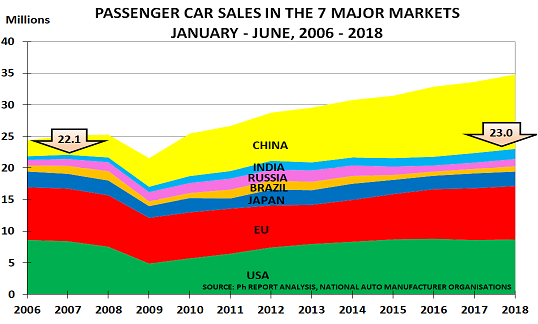 President Trump’s auto trade tariffs are bad news for the US and global auto industry, as the chart highlights:

Formerly high-flying growth markets such as Russia and Brazil have disappointed.  Even after this year’s recovery, their H1 sales were still 35% – 39% below their 2011 peak.

Growth in the mature markets of the USA, Europe and Japan has only been achieved via $tns of stimulus programmes, which have left all 3 areas with vast debt burdens. Now, of course, higher interest rates are causing sales to slow again.

Only China – and India, with its very young population and relatively cheap prices – has seen steady sales growth.

Equally important is the global nature of the auto industry supply chain, where parts manufacture is as important as final assembly.  And as the New York Times reports:

“General Motors now sells many more cars in China than it does in the United States, and the largest exporter of cars from the United States by value is not an American brand, but BMW. By some calculations, the car with the highest proportion of United States and Canadian-made content is the Honda Odyssey — and even that includes roughly a quarter of foreign-made parts.”

The sanctions couldn’t have come at a worse time for the US industry, where domestic steel and aluminium users are already suing the Administration over Trump’s earlier tariff decisions.  Higher prices will only accelerate the current decline in domestic auto demand, which is being hit by 2 major negative trends.

THE AVERAGE AMERICAN IS NO LONGER DRIVING MORE MILES EACH YEAR 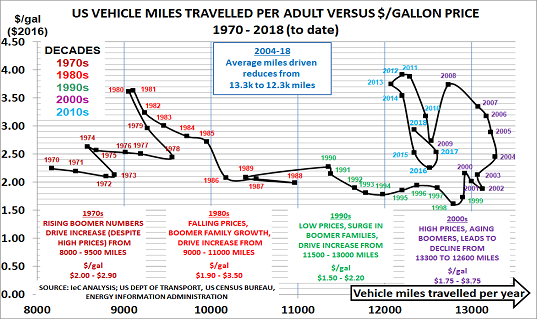 The second chart highlights the key longer-term issue, that Americans are driving less each year:

But in 2001, the oldest Boomers became 55, when people leave the Wealth Creator 25 – 54 age group which drives economic growth.  Average miles per adult peaked in 2004 at 13.3k miles and have since fallen by 1k to the current 12.3k level.  Mileage is back at 2011 levels, when gasoline prices were a third higher at nearly $4/gal.

The issue is that the ageing Boomers no longer have to drive to work each day, or provide a taxi service for their children.  And car ownership is no longer a key “rite of passage” for younger Millennials.  New business models (eg Uber/Lyft services and car-sharing) are far more affordable, given the high costs of car purchase and insurance. 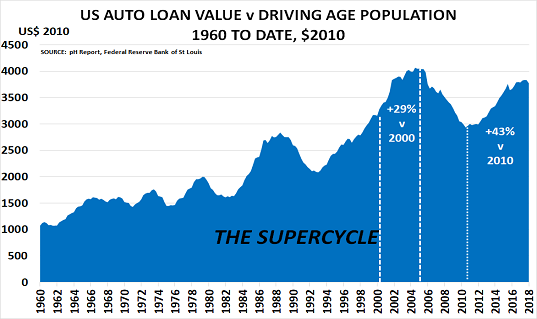 The third chart confirms how US auto sales have become dependent on rising levels of debt:

Unsurprisingly, used-car sales are now increasing.  They were 3.4m in July versus 3.2m in June and the tariffs mean they have a growing price advantage versus new cars.  As the PureCars CEO noted:

“Prices for new cars are on the rise, and as leasing continues to grow in popularity, prices continue to go down in the used car market. Put simply, used cars are often the most realistic purchase for car shoppers.”

“You know, the cars are the big one.  We can talk steel, we talk everything. The big thing is cars.”

But tariffs are not a “silver bullet” and cannot solve the two key issues facing the US auto industry:

As with the stimulus programmes, they will instead simply make it more difficult to develop the new policies needed for success in today’s New Normal world.

The post Trump’s auto trade war adds to US demographic and debt headwinds appeared first on Chemicals & The Economy.