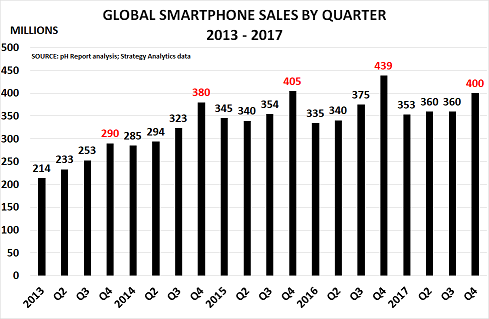 Global smartphone sales have seen major growth until recently as consumers fell in love with going mobile, as the chart shows:

“It was the biggest annual fall in smartphone history (and) …. was caused by a collapse in the huge China market, where demand fell 16% annually due to longer replacement rates, fewer operator subsidies and a general lack of wow models.”

Even more revealing was that only Xiaomi of the Top 5 vendors increased their volume. Apple lost 1m sales, Samsung lost 3m, Huawei lost 4m, whilst even OPPO only managed to maintain its volume.  And Xiaomi only did well because they were recovering from their 2016 collapse, when their share crashed to just 3.35% from 5% in Q4 2015. 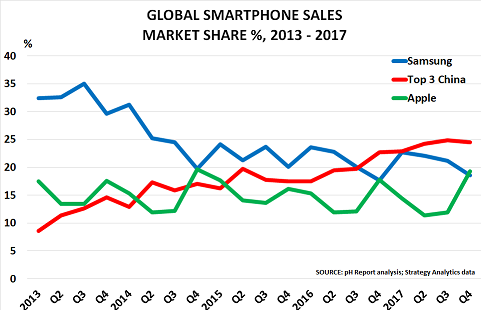 Chinese companies were, however, the real winners during 2017 as the price war intensified, as the second chart confirms: 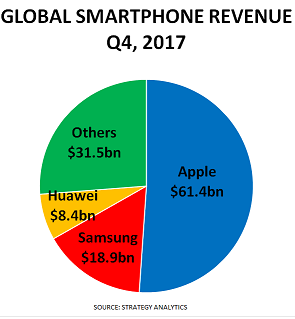 The rise of the Chinese vendors is great news for consumers, but very bad news for their competitors, as the third chart confirms.  It highlights how revenues are now being squeezed for most vendors as the Chinese ramp up their volume.  Only Apple has avoided the carnage by heading defiantly up-market, with its average handset price now close to $800.

The issue is the very different nature of the smartphone market in the major emerging economies, where incomes are much lower than in the West and it is very rare for carriers to subsidise handset sales over the life of the contract.  In India, for example, the typical smartphone sells for less than $200, whilst Apple has less than 2% of the market.

2017 therefore marked a crucial turning point in the market, as I forecasted when reviewing 2016 data a year ago:

“The issue is that 3.1bn people now own smartphones, and the other 4.2bn can’t afford them. So inevitably, the market is going to focus more and more on price. Of course, millions of people will still want to own an iPhone or Galaxy. But price will become the deciding feature for many people.”

2018 seems likely to see pricing pressure intensify, now that the Chinese market has gone ex-growth.  India is likely to be a critical battleground after Xiaomi’s success there in 2017, which was key to its nearly doubling global sales.  As analysts IDC noted:

“Brands outside the Top 5 struggled to maintain momentum as value brands such as Honor, Vivo, Xiaomi, and OPPO offered incredible competition at the low end.”

OPPO is likely to be particularly aggressive as it saw no growth in 2017 after doubling its sales in 2016, whilst Xiaomi is unlikely to risk a second slip-up on volume.  In turn, this makes it likely that Samsung’s mid-market positioning will come under major pressure from Chinese competition in key markets such as China and India.

Apple must now intensify its efforts to move into application-based markets such as healthcare and other services.  It has been building its position over the past 3 years, and has a vast cash-pile from its smartphone profits to fund the necessary shift away from hardware sales.  Samsung’s future looks less rosy, however, given that Chinese vendors have been able to produce smartphones for as little as $20 for the past 2 years.

“The smartphone market is not alone is facing these New Normal challenges. They are coming to the online and High Street stores near all of us, if they haven’t already arrived.“