Around a quarter of global bonds now have negative interest rates.  This means that you get less money back at maturity than you originally invested.  And the number of bonds impacted is rising exponentially, as Bank of America Merrill Lynch reports:

Pensioners, and those who expect to be pensioners, are of course in the direct line of fire as this trend continues. Pension funds, and life assurance companies, have always been major buyers of long-dated high-quality bonds, as this is the least risky way for them to meet their liabilities.  Similarly, advisers have always told investors to move into government bonds as they approach retirement, in order to achieve financial security.

The collapse of yield thus highlights the uncomfortable fact that many pension schemes are no longer fit for purpose.

They were developed in a different era when the majority of people never reached pension age, and when life expectancy at pension age was relatively short. Neither Bismarck in Germany, or Lloyd George in the UK, or even Roosevelt introducing Social Security in the US during the Depression, would have dreamed that their concept of a modest form of social insurance would become an universal benefit.

As pension adviser Melbourne Mercer have warned, only Denmark and The Netherlands have “first class” pension systems, and very few countries have linked pension age to increased life expectancy. As a result, most will probably be unable to pay promised pensions, as the chart suggests:

Corporate pension schemes face even more problems, given the pressure from investors to prioritise dividends over pension fund contributions. The UK Pensions Regulator recently reported that more than half of FTSE 350 companies have paid 10x more in dividends than they spent on fixing their pension fund deficits. And the problem is far worse after the Brexit vote, which caused government bond yields to tumble even further around the world.  UK corporate pension fund deficits rose by 30% in June, to a record £385bn ($506bn) according to the Pension Protection Fund.

It is now too late to resolve these problems without making major changes either to contribution levels or to entitlements. Given that most schemes operate on a “pay as you go” basis, the former would seem to be most unfair to current Wealth Creators in the 25 – 54 age group, already suffering from high house prices, stagnant wages and tuition fee debts in many countries.  As the McKinsey Global Institute reported yesterday:

The New Old 55+ age group will be equally unhappy that politicians have failed to warn of coming problems.

US SOCIAL SECURITY FUNDS WILL BE EXHAUSTED IN 2029, WHEN BENEFITS WILL BE REDUCED 29%
The Swiss position is symptomatic of the problems, with today’s negative interest rates making it even more likely that the SFr 800bn ($840bn) scheme likely to be bankrupt within 10 years, according to local experts. The US position is equally critical, with a new Report from the Congressional Budget Office warning that:

“Social Security’s trust funds, considered together, will be exhausted in 2029. In that case, benefits in 2030 would need to be reduced by 29% from the scheduled amounts….(Already) in fiscal year 2015, spending for Social Security benefits totaled $877bn, or almost one-quarter of federal spending.” 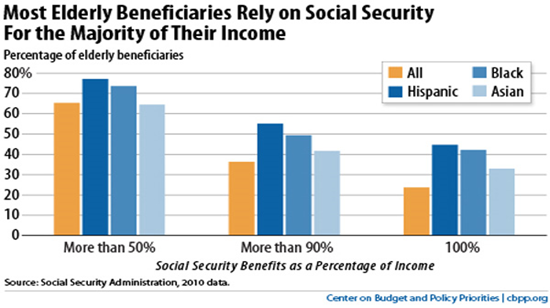 This matters enormously, as the second chart shows, given that around two-thirds of older Americans rely on Social Security for the majority of their income. And the problem is compounded by the fact that public pension funds are having to cut their forecasts for investment returns back to the levels seen before the SuperCycle began – and every 1% cut in return targets increases pension liabilities by 12%.

US pension income is already well below median earnings of $42k. In 2014, men received $18k in median pension income according to a new report from the National Institute of Retirement Security, whilst women’s historically lower wages mean their income was only around $12k. A similar differential can be seen in 401(k) savings, with men having $37k invested versus $25k for women.

Medicare and Medicaid face similar problems.  Medicare supported 54m people in 2014, and Medicaid 70m.  But the trust fund supporting the Medicare Hospital Insurance scheme runs out in 2028.  After this, it will join the Medicare programme for doctors’ fees, and the Medicaid programme, in being paid out of tax revenues and borrowing:

This disaster wasn’t always inevitable.  In 1998, at the end of the Economic SuperCycle, President Bill Clinton announced in his State of the Union speech that the US now had a balanced budget for the first time in 30 years:

“It is projected that we’ll then have a sizable surplus in the years that immediately follow.  What should we do with this projected surplus?  I have a simple, four-word answer:  Save Social Security first.   Tonight I propose that we reserve 100% of the surplus, that’s every penny of any surplus, until we have taken all the necessary measures to strengthen the Social Security system for the 21st century.  Let us say — let us say to all Americans watching tonight — whether you’re 70 or 50 or whether you just started paying into the system — Social Security will be there when you need it.”

Instead, of course, policymakers around the world chose to pretend that monetary policy could somehow fill the gap caused by demographic change. 18 years later, voters are about to start waking up the results of that choice. Either taxes will now have to rise to pay the bills, or benefits will be cut, or a mix of these 2 options will take place.

As John Richardson and I warned back in 2010 in Boom, Gloom and the New Normal, the failure to recognise the importance of demographic change has created massive risks for the economy, as well as for pensioners themselves. US investment magazine Barron’s well summarised the position 3 years ago, warning:

“It is difficult enough to put 50-year-olds on notice that entitlements they expect at 70 will probably not be available. To give them this bad news when they’re 60 or 65 is inhumane.”