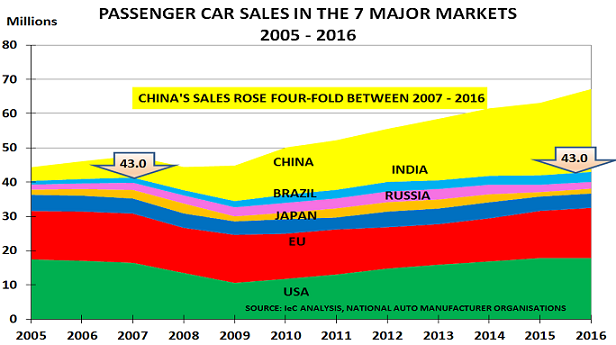 2016 data highlights one startling statistic about the world’s Top 7 auto markets.  They are 85% of total world sales and as the chart shows, their overall sales growth since 2007 has been entirely due to China:

This has been very good news for those who were in China.  Everyone has seen their sales rise – the car companies, the component suppliers and all the service-based industries that supported this fabulous expansion.

There have also been good opportunities in other parts of the world over the period, but also major risks:

Now global sales are likely heading for a fall.  They would already have been much lower without the support of major stimulus measures.  Governments have been desperate to keep auto sales rising, due to their impact on jobs:

   When China’s sales began to slow in 2015, the sales tax was cut from 10% to 5% for smaller cars with engines below 1.6l – which are mostly produced by Chinese manufacturers.  But now China has raised the tax back to 7.5%, leading the manufacturers’ association to forecast sales growth will fall from 21% in 2016 to just 3% in 2017
   Europe has seen widespread and continuous discounting.  Ford’s European profit was just $259m in 2015: it and Fiat Chrysler made operating margins of less than 1% of sales, and GM continued to lose money.  UK sales have relied on $25.8bn ($28bn) of payments since 2011 for insurance mis-selling, as many claimants used their average £3k compensation as a deposit on a car loan.  VW’s diesel scandal will also have long-term negative impact, given that over half of all European new car sales have been diesel vehicles for the past decade.  Paris, Madrid and Athens have already decided to ban diesel cars completely by 2025.
   The USA has seen discounts reach an average $4k in December, up 20% on 2015.  Leasing and financing deals have also been critical in maintaining auto sales.  Experian data shows 86% of new cars were bought with financing in Q3 2016; the average loan amount is at a record high of $30k, and loan terms average 68 months

Logic therefore suggests the consensus is being extremely optimistic in ignoring today’s increasingly uncertain political background, and assuming global sales will continue to grow in 2017:

   China faces political uncertainty ahead of the critical 19th National Party Congress in Q4.  President Xi is almost certain to be re-nominated for a second 5-year term, but cannot currently rely on maintaining control of the critical Politburo Standing Committee – China’s main decision-making body.
   Europe also faces major political uncertainty, with elections due in The Netherlands, France and Germany – and possibly Italy.  In addition, the UK is highly likely to table its decision to leave the EU in the next few weeks.
   In the US, every two-term Presidency for 100 years has been followed by recession.  President Trump is highly likely to take difficult decisions this year, before next year’s mid-term elections and his own re-election bid in 2020

Another key issue is the impact of falling prices for used cars.  Their volumes are already increasing as all the new cars sold in recent years come back for resale.  China’s Auto Dealer Association expects used car sales to equal those for new cars by 2020, whilst Barclays has warned that US new car “prime and subprime net loss rates are close to multi-year highs because of softening used car values.”

Then there is the growing impact of taxi services such as Uber and Did, and the rise of car-sharing business models and self-driving cars.  Most Americans, after all, waste a week of their lives in traffic jams each year, and many auto manufacturers are now introducing more service-driven business models as BMW have argued:

“Our core business in the ’70s was selling cars; in the ’80s, late ’70s came the great innovation of leasing and financing.  Now you can pay per use of a car.  It’s like the music industry.  You used to have to buy an album, now you can pay per play.”

It is not yet clear how bad the downturn will be.  But it would seem prudent to plan for at least a 5% global decline this year, given today’s rising levels of uncertainty and global interest rates.  It will be too late to panic later in the year, once the detail of the downturn has become more obvious.