“What could possibly go wrong?” 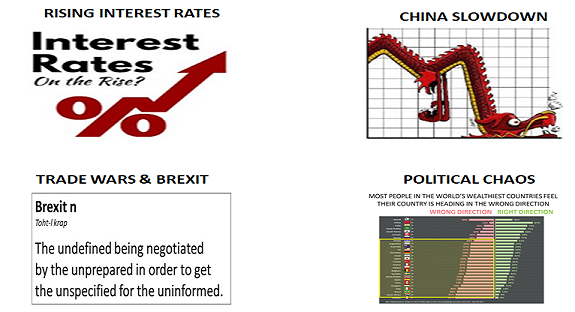 I well remember the questions a year ago, after I published my annual Budget Outlook, ‘Budgeting for the Great Unknown in 2018 – 2020‘.  Many readers found it difficult to believe that global interest rates could rise significantly, or that China’s economy would slow and that protectionism would rise under the influence of Populist politicians.

MY ANNUAL BUDGET OUTLOOK WILL BE PUBLISHED NEXT WEEK
Next week, I will publish my annual Budget Outlook, covering the 2019-2021 period. The aim, as always, will be to challenge conventional wisdom when this seems to be heading in the wrong direction.

Before publishing the new Outlook each year, I always like to review my previous forecast. Past performance may not be a perfect guide to the future, but it is the best we have:

The 2007 Outlook ‘Budgeting for a Downturn‘, and 2008′s ‘Budgeting for Survival’ meant I was one of the few to forecast the 2008 Crisis.  2009′s ‘Budgeting for a New Normal’ was then more positive than the consensus, suggesting “2010 should be a better year, as demand grows in line with a recovery in global GDP“.  Please click here if you would like to download a free copy of all the Budget Outlooks.

THE 2017 OUTLOOK WARNED OF 4 KEY RISKS
My argument last year was essentially that confidence had given way to complacency, and in some cases to arrogance, when it came to planning for the future.  “What could possibly go wrong?” seemed to be the prevailing mantra.  I therefore suggested that, on the contrary, we were moving into a Great Unknown and highlighted 4 key risks:

A year later, these are now well on the way to becoming consensus views.

“At the moment, most companies and investors seem to be ignoring these developments, assuming that in the end, sense will prevail. But what if they are wrong? It seems highly likely, for example, that the UK will end up with a “hard Brexit” in March 2019 with no EU trade deal and no transition period to enable businesses to adjust.

“Today’s Populist politicians don’t seem to care about these risks. For them, the allure of arguing for “no deal”, if they can’t get exactly what they want, is very powerful. So it would seem sensible for executives to spend time understanding exactly how their business might be impacted if today’s global supply chains came to an end.”

The last 10 years have proved that stimulus programmes cannot substitute for a lack of babies. They generate debt mountains instead of sustainable demand, and so make the problems worse, not better.  As a result, voters start to listen to Populists, who offer seemingly simple solutions to the problems which have been ignored by the elites.

Next week, I will look at what may happen in the 2019 – 2021 period, as we enter the endgame for the policy failures of the past decade.

The post “What could possibly go wrong?” appeared first on Chemicals & The Economy.