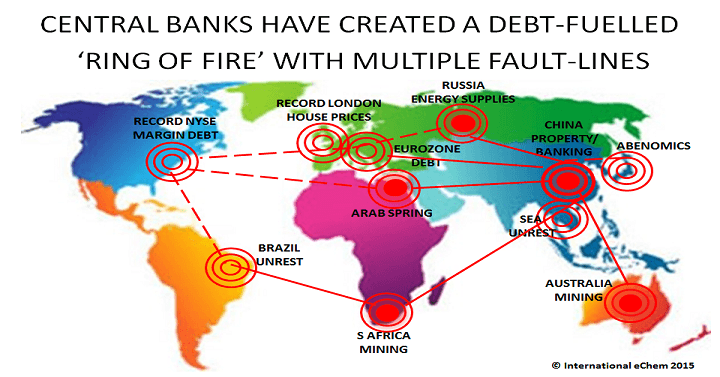 Only one central banker spotted the subprime crisis before it occurred – William White.  Now he is warning that the world will have to revive the Old Testament concept of “debt jubilees“, with much of today’s debt being written off:

“Debts have continued to build up over the last eight years and they have reached such levels in every part of the world that they have become a potent cause for mischief.  Emerging markets were part of the solution after the Lehman crisis.  Now they are part of the problem, too.

“It will become obvious in the next recession that many of these debts will never be serviced or repaid, and this will be uncomfortable for a lot of people who think they own assets that are worth something.  The only question is whether we are able to look reality in the eye and face what is coming in an orderly fashion, or whether it will be disorderly. Debt jubilees have been going on for 5,000 years, as far back as the Sumerians.”

Long-standing readers will remember that White was one of my guides in 2007-8, when forecasting the subprime crisis.  He was then Chief Economist for the central bankers’ bank (the Bank for International Settlements).   I summarised his July 2007 Report in ‘4 risks to the world economy’, and the July 2008 Report as ‘The difficult task of damage control’.  Unfortunately, I was one of the few to take him seriously.

Today, he is Chairman of the OECD Review committee and continues to speak his mind.  His analysis parallels my own concept of the ‘Ring of Fire’ created by central bank stimulus policies, set out in the map above:

I will look at the potential implications of White’s analysis in more detail on Wednesday.

WEEKLY MARKET ROUND-UP
My weekly round-up of Benchmark prices since the Great Unwinding began is below, with ICIS pricing comments:
Brent crude oil, down 72%
Naphtha Europe, down 64%. “European petrochemical producers are maximising propane cracking because of the co-products derived from it”
Benzene Europe, down 58%. “Prices have risen sharply this week, with players now seeing product short for January and early February.”
PTA China, down 47%. “Overall buying appetite continued to be thin in the market”
HDPE US export, down 42%. “Chinese end-users still showed strong resistance to the relatively firm-priced cargoes”
¥:$, down 16%
S&P 500 stock market index, down 3%