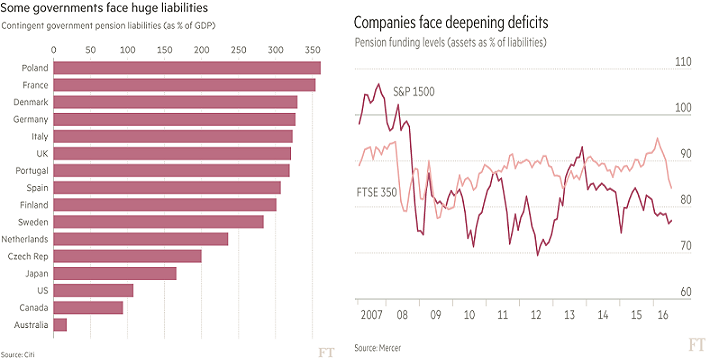 It has been 5 years since we first warned of a looming pensions crisis in Boom, Gloom and the New Normal.  Now, finally, it is becoming a mainstream issue.  The latest round of central bank stimulus policies has clearly been the proverbial “straw that breaks the camel’s back” for anyone connected with pension funding.

The charts above, from a major series in this week’s Financial Times, highlight its conclusion that we now face:

□  “A creeping social and political crisis (due to today’s…) enormous pension deficits”
□  ”In the US, pensions run by companies in the S&P 1500 index were underfunded by $562bn by the end of last month, according to Mercer — nearly $160bn wider just seven months earlier thanks to further drops in bond yields”
□  ”For US public plans — which are allowed to assume far higher interest rates than are available in the bond market, making their liabilities look unrealistically cheap — the problem is far worse. Joshua Rauh, a professor of finance at Stanford University, estimates that their total deficits, if liabilities were priced in the same way as corporate plans, would be about $3.4tn”

The FT also reports the views of several key players in the pensions industry, who confirm the gravity of the situation:

“Baroness Altmann, the former UK pensions minister, said this month that pension funding had reached “crisis point” and blamed the Bank of England’s quantitative easing policy of buying bonds.  The emergency to pension schemes has been caused by QE,” she said. “I don’t see how it is reasonable to ask companies with pension schemes to fill a £1tn ($1.3tn) hole and put money into their businesses as well. It doesn’t add up.”

“It’s existential. That’s the one-word summary of the scale of the challenges,” says Alasdair Macdonald of Willis Towers Watson, an actuarial consultancy. “You can pull different levers, but the declines in rates is an existential problem for the entire pensions system.”

“It’s scary and it’s surreal,” says Carsten Stendevad, who heads ATP, the $110bn national Danish pension plan. “First, if you’re in the business of offering annuities, your product just became very expensive to produce. But secondly we can see that the impact of QE is affecting other asset classes as well. That’s the scarier part. There’s nowhere really to hide.”

The problem, as Altmann notes, has been created by central bank policy.  They have abandoned their core role of maintaining stability in financial markets, to focus instead on the seemingly more exciting world of economic policy.   Thus Andy Haldane, chief economist at the Bank of England, tokd the FT that:

“The central bank’s top priority must be to stimulate the economy. “I sympathise with savers, but jobs must come first,” he says.”

Yet this is emphatically not the job of a central bank.  Economic policy is the job of governments.  Only governments can debate the impact of key issues such as increasing life expectancy with the voters, and implement new policies.  As I noted last week when discussing the US pension crisis:

“Common sense tells us that demographics, not monetary policy, drive demand.  Unfortunately, vast amounts of time and money have been wasted as a result.

It is good news that mainstream media are now focusing on the pensions crisis.  Nothing can be done whilst central banks are allowed to pretend that monetary policy can magically restore the economy to SuperCycle growth levels.

But as I also noted, there are no easy answers to the problems that central banks have created.  ”The path back to fiscal sanity will be very hard indeed.”