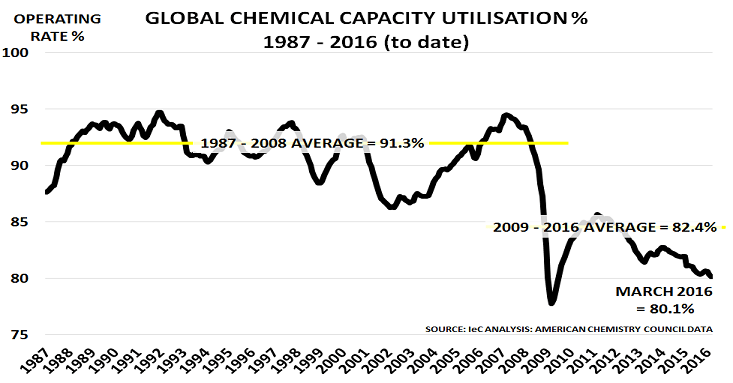 Thank goodness for Janet Yellen, and China’s provincial governments.  That was clearly investors’ thoughts, when they bid up chemical company share prices during Q1.  For as the chart above shows, there was nothing in the fundamentals of supply and demand to suggest economic recovery was finally underway.  Instead, the latest American Chemistry Council data shows that global capacity utilisation fell to 80.1% in March – a new low for the current cycle.

However, the US Federal Reserve’s sudden “discovery” in early Q1 that the US economy wasn’t recovering as expected – Q1 GDP was just 0.5% and inflation only 0.1% – led investors to assume interest rates were unlikely to rise during 2016 as the Fed had promised:

Oil prices thus repeated the 50%+ rally seen this time last year, causing downstream companies to panic and restock heavily.  This was very good news for chemical company profits, and for investors’ share/debt portfolios.  But as my quarterly summary of company results shows below, company managements were more realistic about the outlook.

Some product areas, such as polyolefins, did very well.  And US company earnings were boosted by the temporary rise in the cost advantage of their gas-based feedstock.  But many companies reported customer resistance to rising prices, suggesting volume was being driven by the restocking phenomenon rather than underlying demand growth.

Those companies such as Arkema who have embarked on long-term portfolio transformation efforts may well prove to be the real Winners over time, once markets recover from their excitement over the dollar’s weakness.