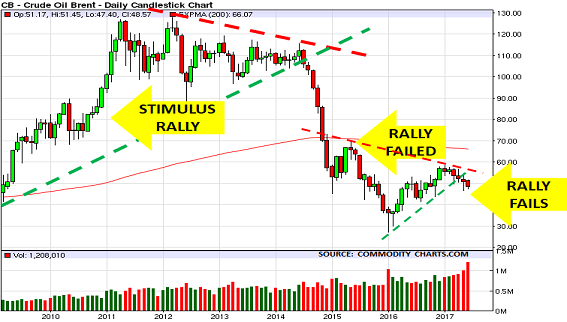 Oil markets have been at the centre of the recent myth that economic recovery was finally underway.  The theory was that rising inflation, caused by rising oil prices, meant consumer demand was increasing.  In turn, this meant that the central banks had finally achieved their aim of restoring economic growth via their zero interest rate policy.

This theory was first undermined in 2014, when oil prices began their fall.  There had never been a shortage of oil. Prices rose to $125/bbl simply because the hedge funds saw commodities like oil as a ‘store of value’ against the Federal Reserve’s policy of weakening the dollar.

The theory sounded attractive and plenty of people had initially made a lot of money from believing it.  But it didn’t mean that the global economy had recovered.  And by August 2014, as I highlighted at the time, oil prices were starting to collapse under the weight of excess supply.  As I also suggested in the same post, this meant “major oil price volatility is now likely”.  By luck or judgement, this has indeed since occurred, as the chart shows:

□  The 2009 – 2014 rally was dominated by “technical trading”, as oil markets lost their role of “price discovery”
□  August – December 2014 then saw prices crash to $45/bbl
□  Prices rose nearly 50% in early 2015 in a “failed rally”, as hedge funds assumed prices would quickly recover
□  Prices then halved to $27/bbl in January 2016 as the reality of over-supply swamped the market
□  Since then prices have doubled as OPEC combined with the hedge funds to try and push prices higher
□  This rally now seems to have failed, as US shale supply continues to increase

In reality, as I discussed last month, this final rally merely enabled new US production to be financed.  The US oil rig count has doubled over the past year, and each rig is now 3x more productive than in 2014.  At the same time, the medium-term outlook for oil demand in the key transport sector is becoming more doubtful, with China and India both now moving towards Electric Vehicles as a way of reducing their high levels of air pollution.

A measure of how far the market has moved was seen at last week’s Clean Energy Ministerial meeting, which:

“Set a collective aspirational goal for all EVI members of a 30% market share for electric vehicles (EVs) by 2030. It does so with the aim of taking advantage of the multiple benefits offered by electric mobility for innovation, economic and industrial development, energy security, and reduction of local air pollution.”

Already oil price targets, even amongst the optimists, are now being revised downwards.  Nobody now talks about a “quick return” to $100/bbl, or even to $70/bbl.  Instead the hope is that possibly they might return to $60/bbl at some point in the future – others merely hope that today’s $50/bbl level can be maintained. 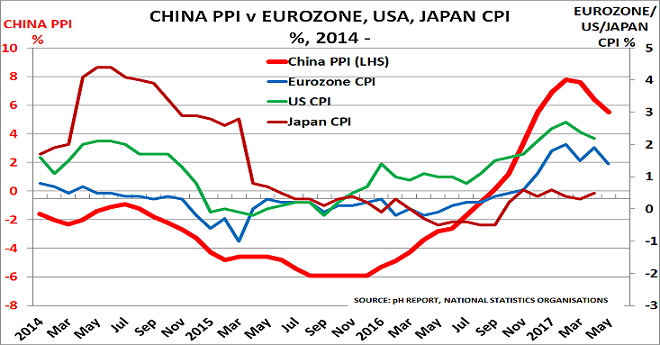 Hope, however, is not a strategy.  And in the absence of major geopolitical disruption, it seems likely that the hedge funds will continue to withdraw from the market and leave supply/demand fundamentals to once again set the price. In turn, this will challenge the reflation and recovery myth that grew up whilst the funds were boosting their bets on the oil and commodity markets.

As the second chart shows, inflation has already begun to weaken in China as well as in the US and Eurozone economies.  China’s move away from stimulus will help to accelerate this move in H2, In turn, markets will likely return to worrying about deflation once more.

Japan is an excellent indicator of this development.  Its inflation rate completely failed to take off despite the major rise in oil and other commodity prices. As I have long argued, Japan’s ageing population means that its previous demographic dividend has now been replaced by a demographic and demand deficit.

The US and Eurozone economies are both going through the same process.  10k Americans and 18k Europeans have been retiring every day since 2011 as the BabyBoomer generation reaches the age of 65.  They already own most of what they need, and their incomes generally suffer a major hit as they leave the workforce.

Companies and investors therefore need to prepare for a difficult H2.  The failure of the latest oil price rally, and the return of deflation worries, will puncture the myth that reflation and economic recovery are finally underway.  Political stalemate will increase, until policymakers finally accept that demographics, not central banks, drive demand.