Markets enter the eye of the storm

Markets have now entered “the eye of the storm” after the dramatic falls seen earlier this month.  This is the apparently calm region at the storm’s centre, which often leads to a hope the storm is over. 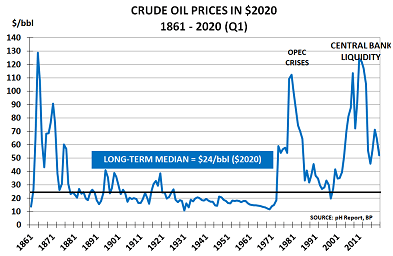 The question, of course, is whether the market is simply in the eye of the storm, or has reached a stable floor:

Oil producers and their advisers have indulged in a decade of wishful thinking about the likely long-term level for oil prices.  They chose to assume that oil “could not” go below $50/bbl, and so vastly expanded capacity. It therefore seems wise to assume that markets will now move lower, like a pendulum.

The world’s energy watchdog has already warned that “global oil demand could drop 20% as 3bn people are currently in a lockdown” in Q2.  We also know that storage tanks are filling up, and that traders are starting to charter ships to store unwanted oil.

For the moment, traders are happy to do this as they assume the world will have returned to “normal” by the summer. Prices in the futures market are therefore high enough to cover the cost of storage.

But cracks are in this rosy scenario are starting to appear. Landlocked markets such as Wyoming in the USA have already seen producers pay consumers to take the oil away. Canada’s Western Select grade, the benchmark for Canadian oil sands output, traded as low at $4.58/bbl on Friday, and other N American grades are also already in single figures.

The problem for producers is that oil wells can easily be damaged if they are shutdown because of low prices.  And many producers still don’t believe what is happening. So it seems most likely that the market is indeed just in the eye of the storm, and has further downside ahead. 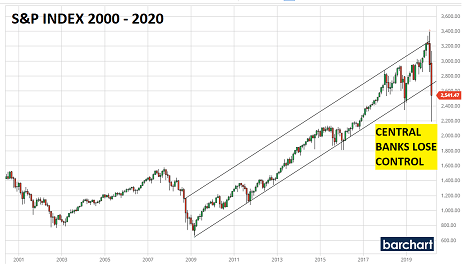 The market closed Friday at 2541, up 10% on the week despite Friday’s fall. The Index’s volatility this month has also been astonishing as it moved between a high of 3136 and a low of 2280.

The key issue, as noted last week, is that investors still assume that policymakers will never let prices fall:

We certainly hope that the package, and the other measures being taken by governments around the world will help support the economy and family incomes.  But in reality, most governments still seem well behind the curve in terms of actioning comprehensive contingency plans.

The risk is therefore that markets have failed to recognise the scale of the problems ahead. Last week’s rally was the strongest since October 2008, and we all know that was a long way from the end of the crisis.

As with oil, it therefore seems most likely that last week’s rally was a sign that markets are in the eye of the storm, rather than preparing for a recovery. 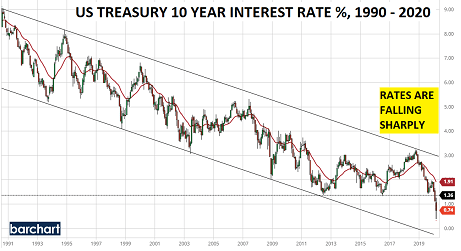 The market closed on Friday yielding 0.74%, down by a fifth since last week. Its volatility during March saw it fall dramatically, once rates broke through previous lows around the 1.36% level. to hit a short-term low of 0.39%.

Unfortunately for stock market bulls, developments in the bond markets contradict their optimism. If bond investors thought a recovery was underway, interest rates would be rising in anticipation of inflation. Lower rates mean that bond investors are currently more worried about the risk of deflation.

Falling oil prices, plus the collapse of demand due to the global lockdowns, would suggest that deflation is now almost inevitable. This will be very bad news for anyone who owes money, as it means the ‘real’ cost of the debt will increase, rather than reducing with inflation.

It would also be very dangerous for the global economy, given today’s record levels of government, corporate and personal debt. 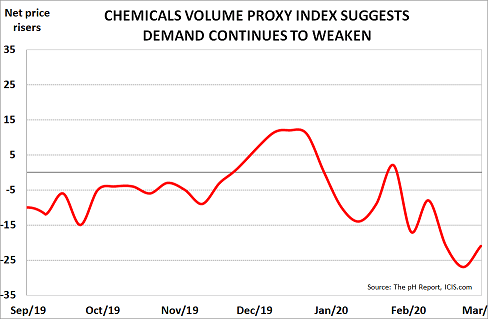 We focus on Chemicals Volume as this is the best leading indicator for the global economy.

Our Chemicals Volume Proxy Index has a near 20-year history of accurately predicting changes in the wider economy:

Chemicals had already been anticipating recession last year, as the chart shows. And the Index saw only a temporary upturn as a result of New Year optimism, before the impact of COVID-19 began to hit China and the Asian economy.  Since then, it has continued to fall – and has followed the normal pattern where each fall is partially retraced before a new fall takes place.

It is rather like the action of a rubber ball bouncing down the stairs, where the ball bounces up – but never regains the stair above. In this, the Index is showing the same patterns seen in oil, the S&P 500 and bond markets.

We can all hope that it will quickly bottom, but there is little evidence to suggest that this moment is close at hand.