The April issue of the pH Report is now published. It is our premium monthly report with in-depth analysis of the global economy. The April issue suggests we are moving into a New Normal world, with global supply chains proving fragile and sustainability on a local basis becoming essential. Please email phodges@thephreport.com if you would like more details. 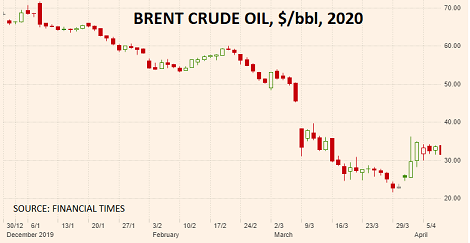 The market closed Thursday at $31.48/bbl, with wishful thinking still dominant amongst many policymakers.

Sunday’s OPEC+ meeting finally agreed to cut output by 9.7mbd for 2 months from May,– and then by 8mbd in H2.  Yet the International Energy Agency suggests oil demand will be down by 25mbd in Q2, and global oil storage is rapidly filling.

Even this proposal was partly ‘smoke and mirrors’ as it set the baseline for Saudi/Russian cuts at 11mbd – above their average 2019 output.  (Saudi output averaged 9.8mbd; Russia produced 10.8mbd). Friday’s G20 Energy Ministers meeting of the world’s largest economies similarly ducked the key issues, agreeing only to establish a Focus Group to monitor “response measures”.

Speculators, of course, have taken full advantage of this wishful thinking, pushing prices up 50% from $24/bbl on 1 April to $36/bbl on 9 April. But at some point, reality is likely to return: 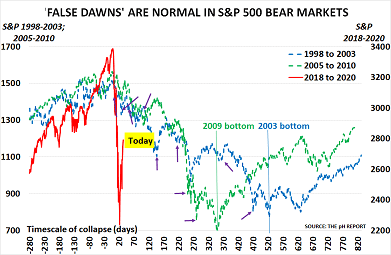 The market closed Thursday at 2777, up 10% on the week, despite a new warning from the IMF on the scale of the economic depression ahead:

“Global growth will turn sharply negative in 2020. In fact, we anticipate the worst economic fallout since the Great Depression.”

Instead, speculators cheered the decision of the US Federal Reserve to spend $750bn bailing out companies whose debt falls to ‘junk levels’ after 22 March.

But as the chart shows, history suggests the rally will prove to be the first of many ‘false dawns’. It compares the first 34 days of today’s bear market with those of 2000 and 2007. On both occasions, it took a long time before the bottom was finally reached.

The Fed’s actions are also storing up major problems for the future.  It continues to ignore the cardinal rule for a central bank, that bailouts should only be conducted at “penal rates of interest” to ensure the lesson is learnt. As the most influential judge in corporate America, Leo Strine Jnr, wrote on Friday:

“After a 10-year economic expansion that led to record increases in earnings, plus huge corporate tax relief, American corporations should have had substantial cash reserves to sustain them during a short period without revenue. But many did not, and instead were highly leveraged, lacked adequate reserves and lived paycheck to paycheck, so to speak. What happened to that cash? Much of it was returned to shareholders in dividends and stock buybacks.”

If the IMF is right about the likely scale of this crisis, taxpayers will have plenty of time to rebel against the idea that they should pay for managements’ mistakes. 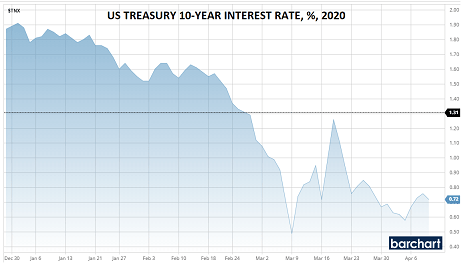 Wishful thinking is even creating major volatility in interest rates.  Today’s electronic trading means that speculators can move vast amounts of money move around with the click of the mouse, causing others to get whipsawed.

But history suggests today’s downward move in interest rates will continue as long as we see “lower highs and lower lows”. 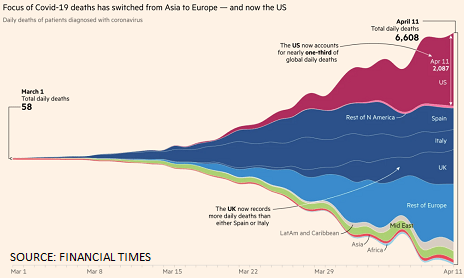 Covid-19 is the key focus for all the major markets.

The chart from the Financial Times highlights the geographical spread of the virus:

Meanwhile, as the IMF has warned, the economic costs of these failures are also rising every day.