“Saving lives and protecting livelihoods ought to go hand in hand”, IMF

April will be the cruellest month, as the Covid-19 virus starts to have its full impact on health and the economy. 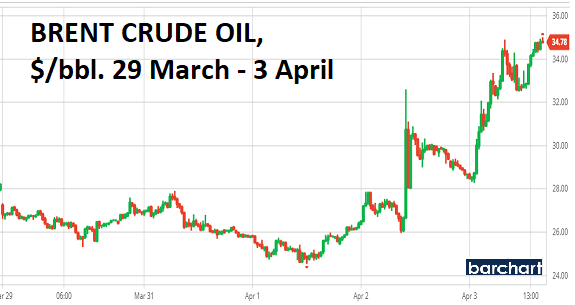 The market closed Friday at $34.78/bbl, after a wild end-of-week rally set off by President Trump’s claim to have brokered a deal to end the Saudi Arabia/Russia price war.

However, it has since turned out he didn’t have a signed piece of paper to confirm the deal. Instead, we saw a variety of different potential deals being discussed:

Meanwhile, in the real world of physical supply/demand, major US refiner Flint Hills said it was declaring force majeure on some oil purchases as “there is nowhere to move or store product” at their Corpus Christi refineries.

And global energy watchdog, the International Energy Agency, suggested that April would see a 25mbd oil surplus – 25% of global production – due to the global lockdowns.

Nobody can really know what will happen to oil demand in the next few weeks. But as the IMF has warned, the world is now facing an economic crisis alongside the health crisis: “Never in the history of the IMF have we witnessed the world economy coming to a standstill. It is way worse than the financial crisis”. 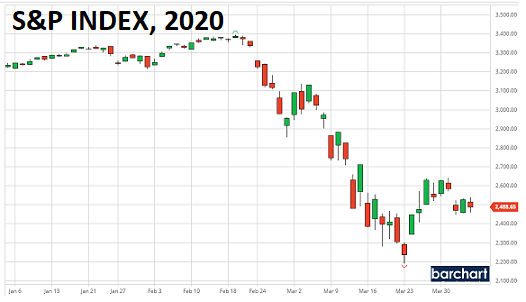 As we noted last week, the major risk is still “That markets have failed to recognise the scale of the problems ahead.”  International co-operation to control the pandemic seems as far away as ever. So the virus has a major advantage, as it knows no borders.

Most worrying is that the wealthiest country in the world, the USA, is now becoming the epicentre of the crisis.  As the Financial Times warns,“The hardest hit urban centre in the world is New York. The state’s death toll is rising faster than in any other subnational region at this stage of its coronavirus outbreak.” 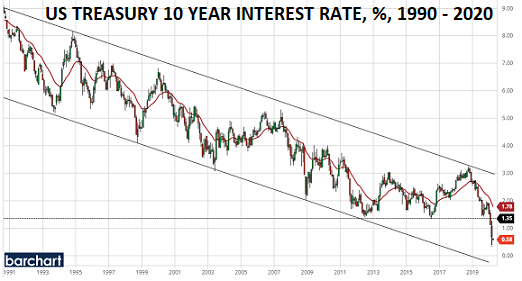 The rate closed on Friday yielding 0.58%, falling by a fifth for the second week in a row.

The tumult at the end of March was due to the large pension funds ‘rebalancing’ their portfolios back to their typical 60% equity: 40% bond weighting. This happens every quarter, but its scale was obviously very much larger than usual.

US interest rates and stock markets were temporarily forced higher as the funds moved billions of dollars into equities and sold bonds. In turn, many commentators assumed that the crisis was over.

But now reality is dawning again, as the ‘flight to safety’ resumes – causing interest rates and stock markets to resume their downward movement.

And we still see no sign, however, that markets understand that a major challenge still lies ahead.  Deflation is about to become the key risk to company earnings:

The reason is that the impact of the oil price collapse and global lockdowns will start to feed through into producer and consumer prices.  The IEA’s forecast of a 25% drop in oil demand gives a sense of the downside to expect. 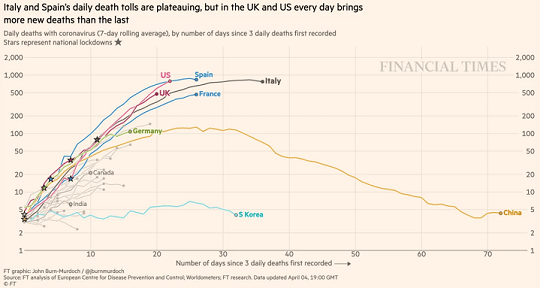 Covid-19 is the key focus for all the major markets.

The interactive chart from the Financial Times highlights the grim reality:

S Korea has had a different experience. Its pandemic contingency plan has clearly worked well, and done its job in protecting its population.

This reminds us of the importance of the IMF’s policy statement. “Saving lives and protecting livelihoods ought to go hand in hand”.