“There are decades where nothing happens; and there are weeks where decades happen” – Lenin

A month ago, we forecast here that oil prices would go negative in Q2, for the first time in history. Last Monday, the May contract for WTI, the main US benchmark crude, closed at -$36.97/bbl, much to the world’s surprise. 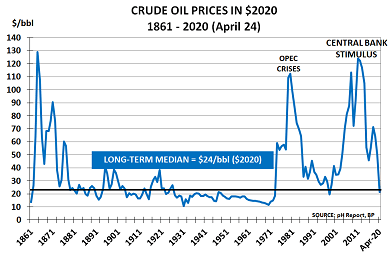 A month ago, we had forecast in the first issue of the pH Outlook Briefing that:

“Q2 is therefore likely to see major destocking, further depressing demand in the short-term. And as oil tanks are already nearly full, we may even see producers paying buyers to take oil from them – effectively splitting the savings from not having to pay to store it.”

Consensus opinion was sure “this couldn’t happen”.  But last Monday, our forecast came true with WTI, the major US benchmark. closing at -$36.97. This confirmed, once again, that “expert commentary” is often just an opinion, not analysis.

Today, the question is “What happens next”?  Our analysis suggests that nothing has really changed in the underlying supply/demand balance. As we noted last week:

“OPEC+’s 9.7mbd cuts only start in May; and experts Rystad expect compliance to be just “50% through May”. In the meantime, the IEA now suggests Q2 will see a demand loss of 23.1mbd. And, of course, April’s extra production from the Saudi-Russia price war is now en route to the market. 20 tankers with 40mb of Saudi oil are expected in the US Gulf in the next month, 7x normal volume. Reuters suggest US storage capacity for refined products is a weak link, and could force refiners to cut back operating rates”.

Some US production is indeed now starting to be shut in. But this is likely to be a slow process, as the operator may well decide it is better to gain some income from sales, rather than bear the costs of closure. Shutting down might also create a need to break contracts, which could prove expensive. And in the meantime, stocks are still building.

Another problem is that although some storage is still empty, it has mostly been booked by savvy traders looking to profit from the chaos. And downstream, US gasoline inventories are now at record levels of 263mb – equal to nearly 50 days of consumption at current rates.

This suggests that the WTI market is simply acting as the ‘canary in the coalmine’, warning that global oil markets will now start to be impacted by the same problems of over-supply and lack of storage. 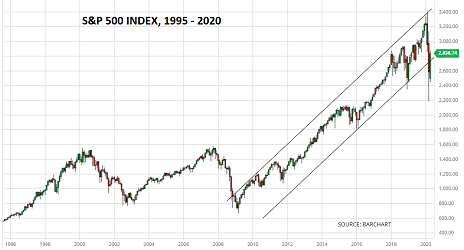 The market closed Friday at 2837, down 1% on the week. It had rallied 75 points on the previous Friday on reports remdesivir might prove an effective treatment for Corona-19: But as often happens, the trials failed to show a benefit and have ended.

The news highlights the speculative nature of the current rally.  Obviously, we all hope that an effective treatment and a vaccine can be found for Covid-19.  But anyone with experience of drug trials knows that the outcome is very uncertain, even when they enter final Phase 3 trials.

The market is therefore likely to face some major challenges in the weeks ahead.  The US Federal Reserve has already added $2tn of stimulus over the past month. And it is now facing questions as to why it is again supporting Wall Street rather than ordinary people on Main Street, as even the Wall Street Journal has warned:

“The only way for the Fed to maintain its independence is with support from the middle class across the country. Wall Street and the Beltway media won’t be enough to hold off populist anger if much of the American economy crumbles.”

Similarly, the Financial Times has noted that:

“The divergence between the flying stock market and the dying economy is so extreme it is leaving many analysts scrambling for explanations.”

As the chart shows, investors have grown used over the past decade to assuming that the Fed can always support stock prices. Whenever prices seemed likely to fall out of the tramlines, the Fed was always there with more stimulus dollars to support the speculators. Therefore, many now believe that stock markets “cannot fall”, despite the IMF’s warning that this is “the worst economic downturn since the Great Depression“.

But oil markets have shown that, in the end, economic reality can and will break through. Investors might therefore need to ponder Lenin’s insight that events can move very quickly, once reality starts to break through. 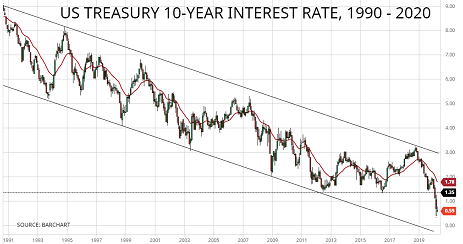 The rate closed Friday at 0.59%, once again down by a tenth from last week. Its decline highlights the underlying weakness in the speculators’ hopes for a quick return to ‘business as usual’. If recovery were really about to get underway, then real demand should be rising along with interest rates.

But as the chart confirms, the rate is continuing to weaken, and looks likely to take out its recent all-time low of 0.49% on 9 March. And after that, it seems likely that US rates will follow Europe and Japan into negative territory, confirming that a global depression is likely underway. 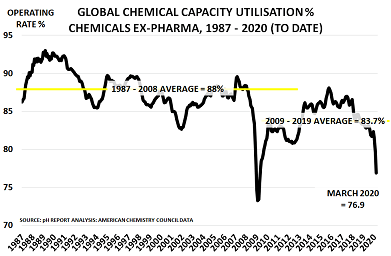 The chemical industry is the best leading indicator for the global economy due to its size, and the fact that its products are used in almost every part of society.

The industry also provides data in almost real-time, as the chart based on American Chemistry Council data confirms. We focus on Capacity Utilisation (CU%), where March data is already available.  It highlights the scale of the downturn, which began in China in February and spread to Europe in March.

The March CU% was already down to 76.9%, and April’s data seems certain to fall below the low of 73.2% seen in February 2009. The CU% is therefore highlighting the scale of the downturn, and its speed. And as yet, there is unfortunately no sign that the CU% is likely to plateau, let alone recover.

As always, we welcome your comments at info@thephreport.com