Wall Street hopes for the best, whilst Main Street fears the worst

Wall Street and Main Street are in separate silos. Wall Street is supported by the Fed’s response to the pandemic. Main Street is focused on its impact. The next few weeks will see one proved right, and the other wrong. 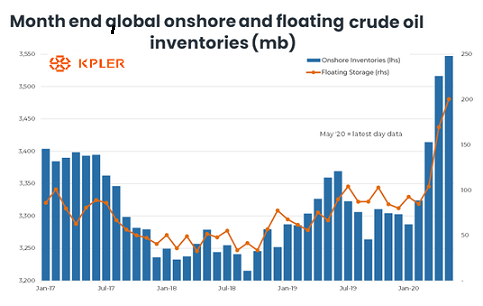 The market closed Friday up a further $2/bbl at $37.67/bbl, despite Memorial Day not having seen a sudden surge in US gasoline demand at the start of the US driving season. Instead, as we forecast, inventories have continued to build as Reuters reports:

As Reuters summarises the position:

” As the lockdown lifts, the impact of the ensuing recession on demand is being unmasked.”

The same picture is being seen around the world, as Kpler’s chart confirms. Floating storage has now reached 200mb, whilst onshore inventories are 3,500mb – all record levels.

Nobody knows how long it will take for these inventories to return to normal. But it seems unlikely they will disappear before at least the end of this year.

The market closed Friday at 3044, recapturing the 3000 level at a moment when the economic outlook continued to cloud, as the head of the Dallas Federal Reserve Bank warned on Friday:

“Many smaller firms and those with lots of debt may not survive. After massive layoffs, how easy is it to bring people back? That was a challenge before and it will probably be a bigger challenge going forward.”

The Federal Reserve’s decision to expand its balance sheet to $7tn+ is clearly providing major support. As the Wall Street Journal has revealed, recent weeks have even seen the Fed buying bonds from soon-to-be bankrupt companies – including Hertz, JC Penney and Neiman Marcus – when most analysts knew they were unlikely to avoid Chapter 11.

The other major source of support has been investors’ focus on the 6 FAAANM stocks (Facebook, Apple, Alphabet, Amazon, Netflix, Microsoft), which have trebled since 2007 and are already back at their pre-lockdown peaks.

As the charts show, the base of support for global stock markets is therefore very narrow:

One of the golden rules of investing is that a strong market is one where earnings are supported by a strong economy. Even the best business can go through a bad patch, or be temporarily run by a fool.

Today’s market has lost this support. Instead, it is dependent on massive out-performance by just 6 stocks and the Fed’s indiscriminate buying. 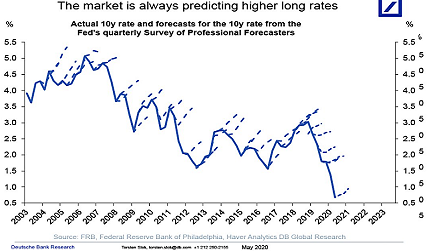 The rate closed slightly lower on Friday at 0.64%, after another wild ride as investors once again decided that recovery and inflation were just around the corner, and then began to worry they might be wrong. It jumped to 0.70% early in the week, before collapsing back down again to close below last week’s level.

As the chart shows, this highlights the major uncertainties in the market. Consensus opinion has been forecasting higher rates and inflation every year since 2008. It has sometimes been right in the short-term, but the overall trend has been downwards.

The 10-year rate was at 5% at the end of 2007, and has never come close to recovering this level. And the recent dramatic fall in rates from the 3% peak suggests that many investors are more worried about a Depression than an inflationary economic boom. 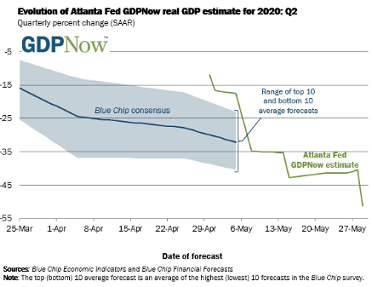 The Atlanta Federal Reserve Bank publishes a running estimate of real GDP growth based on available data for the current quarter. As their chart shows, it is currently forecasting that US GDP will fall by 51.2% in Q2 (not a typo).

The forecast has been steadily declining since the initial estimate in early May of a 12% fall.

This evidence from Main Street suggests Wall Street is being over-optimistic in assuming consumers are about to rush back to travel and leisure activities. If they don’t, then the advertising income that supports companies such as Facebook and Alphabet will inevitably reduce, as will consumer spend with Apple, Amazon and Netflix, and corporate spend with Microsoft.

The next few weeks will tell us which view is right.